Save more on your next rental car!
Save on close-to-home escapes with rental car deals

Best Hotels In Baltimore See All 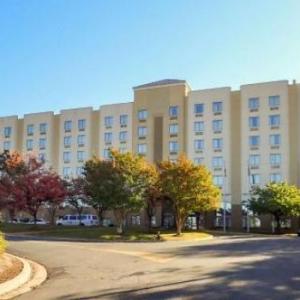 2 Stars and Below See All

Baltimore Townhome with Deck Less Than 2 Mi to Dtwn!

4 Stars and Above See All

Belonging to the Historic cities of the Eastern Coast of the US, Baltimore is a place full of energy and complexity in its infrastructure and design. This birthplace of the United States National Anthem is located between Philadelphia and Washington D.C. This city has energetic nightlife, pleasant neighborhoods, and modern areas for the entertainment of the people. The enormous population of African American individuals here had a striking impact and effect in the decade of the Civil Rights movement.

Established in the year 1729, its utterly important location near the Chesapeake Bay immediately converted this place into an important trading hub and port. The famous historical site now converted into a neighborhood in Baltimore; Fort McHenry is a pentagonal fort situated on the Locust Point which is quite popular for defending the Baltimore Harbor from attacks of British Empire in the War of 1812.

This trading hub has several neighborhoods that to this date maintain that sophisticated old-fashioned environments. The neighborhood of Fells Point which was established in the year 1763 mainly an attraction for its 18th century architecture, restaurants, typical old-fashioned pubs, and cobbled streets. A few of the most popular accommodational sites of Baltimore are available here, whereas a few cheaper sites having a local feel to them are available in the Midtown and the Federal Hill.

The Inner Harbor of Baltimore is a vivacious place to visit for tourists where they can look for live concerts and modern venues. The majority of the Baltimore, MD hotels are situated in the Harbor area, whereas the district of business also comprises a great variety and availability of places for accommodations.

Whether you have arrived at the Baltimore-Washington International Airport or Penn Railway Station, our website always has something in for you to book for!

Explore hotel options in other areas of Baltimore

Find hotels near landmarks, museums and other sightseeing spots

Stay At The Best Baltimore Hotels By Amenities

74 Hotels with Free Parking in Baltimore

8 Hotels with Airport Shuttle in Baltimore

16 Hotels with Fitness Center in Baltimore